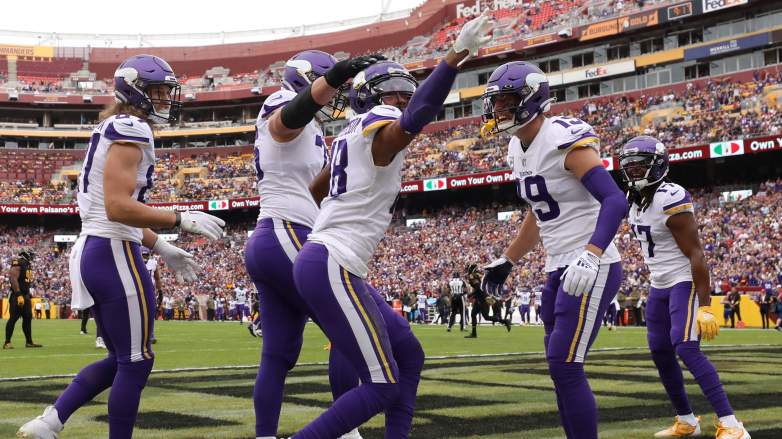 Minnesota Vikings signal caller Kirk Cousins seems like a pretty buttoned up guy, but every once in a while the quarterback is known to cut loose.

The plane ride home after Sunday’s comeback victory over the Washington Commanders proved to be one such occasion, as Cousins ripped it up amid a group of smiling teammates, dancing shirtless with several chains draped around his neck.

Vikings Victory Over Commanders Could Have Major Playoff Implications

GettyWide receiver Justin Jefferson of the Minnesota Vikings celebrates with teammates after his touchdown in the first quarter of a game against the Washington Commanders at FedExField on November 6, 2022 in Landover, Maryland. (Photo by Todd Olszewski/Getty Images)

The Vikings had plenty of reasons to celebrate after trailing the Commanders by 10 points in the fourth quarter before scoring 13 unanswered to finish the game with a 3-point victory. Cousins was 22-of-40 for 265 yards, two touchdowns and one interception on the day.

The win moved Minnesota to a mark of 7-1 on the season, stretching the franchise’s NFC North Division lead to 4.5 games over the Green Bay Packers and Chicago Bears, both of which lost on Sunday.

While it is perhaps too early to call the division decided, the Vikings appear to have it well in hand. Maybe more importantly, Sunday’s victory positions Minnesota favorably as the team turns the corner to the second half of the season.

The schedule ratchets up significantly beginning next week, with the first of four consecutive games against opponents with winning records. The Vikings face the Buffalo Bills (6-2), Dallas Cowboys (6-2), New England Patriots (5-4) and New York Jets (6-3) over the next four weeks.

Minnesota sits alone in second place in the conference, 1.5 games up on the NFC West Division-leading Seattle Seahawks (6-3) — the only team within shouting distance of the No. 2 …read more