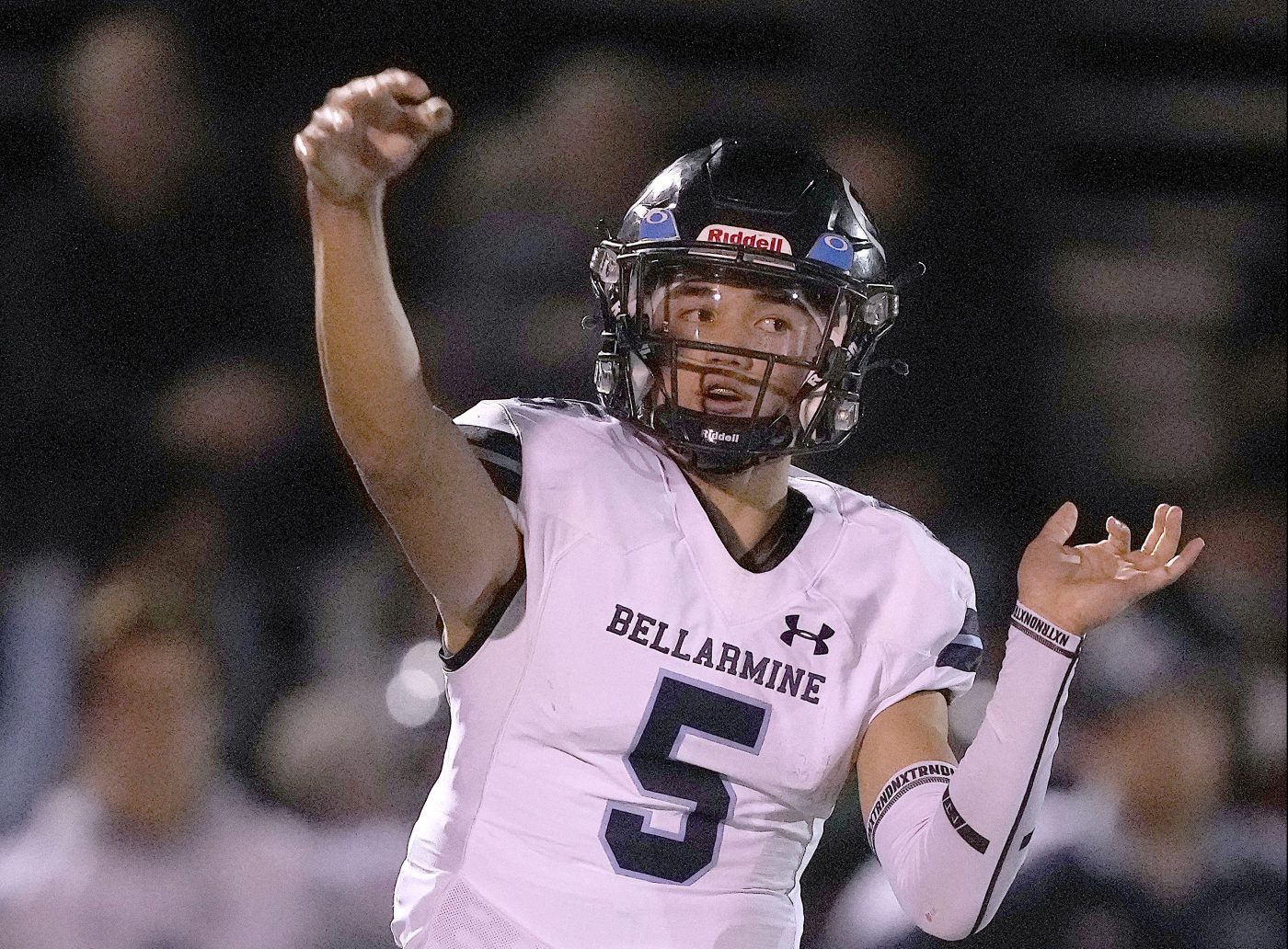 ATHERTON – A Menlo-Atherton football team with high hopes concluded its season in disappointment, while Bellarmine College Prep has found its rhythm.

The confluence between teams in different stages was evident in their Central Coast Section Division II first-round matchup on Friday night, a game Bellarmine won going away, 30-7.

One clear difference between the season’s opening game between the same teams, a 48-34 M-A victory, and this was the absence of M-A’s five-star receiver Jurrion Dickey, who hasn’t played since the fourth game because of injury.

“Jurrion Dickey, you have to mention him,” Bellarmine Coach Jalal Beauchman said. “He was a huge part of that first meeting. His presence was missed out there today.”

Unlike their first meeting, M-A’s defense opened with a four-lineman set to focus on stopping the run.

“Our D-line is our strength,” M-A Coach Chris Saunders said.

For a while, it worked.

The Bells scored on their second and fourth possessions, on passes from Nate Escalada to Parker Threatt (14 yards) and tight end Joe Fuqua (7 yards).

But the M-A defense had its moments: Sacks by Khayri Jett, Jordan Masuisui, and David Tangilanu, and a fumble recovery by Jett, all in the first half. But M-A’s lack of offensive production – other than Sherrod Smith’s 78 yards on 13 carries — meant the Bears’ defense spent a lot of time on the field, and Bellarmine wore it down. Smith accounted for 90 (66 percent) of M-A’s 137 offensive yards.

M-A crossed midfield only twice in the game. The first was when the Bears bolted out of the second half with a 50-yard kickoff return by Kameron Hawkins, followed by three Smith runs over the final 43 yards.

But M-A, starting senior Colton Assunto at quarterback for the first time this season (coach’s decision), only was able to advance as far as the Bells’ 47-yard line thereafter and turned the ball over four times in the game.

Defensively, M-A dared Bellarmine to pass and the Bells obliged. Escalada, who started the season as the starter and then backed up Threatt as QB for much of the up-and-down season, has found a home at quarterback now.

Escalada completed 16 of 20 passes for 233 yards and had no interceptions. The proof of this non-traditional Bells …read more

The top nine most expensive home sales in Piedmont and Oakland, reported the week of Nov. 7