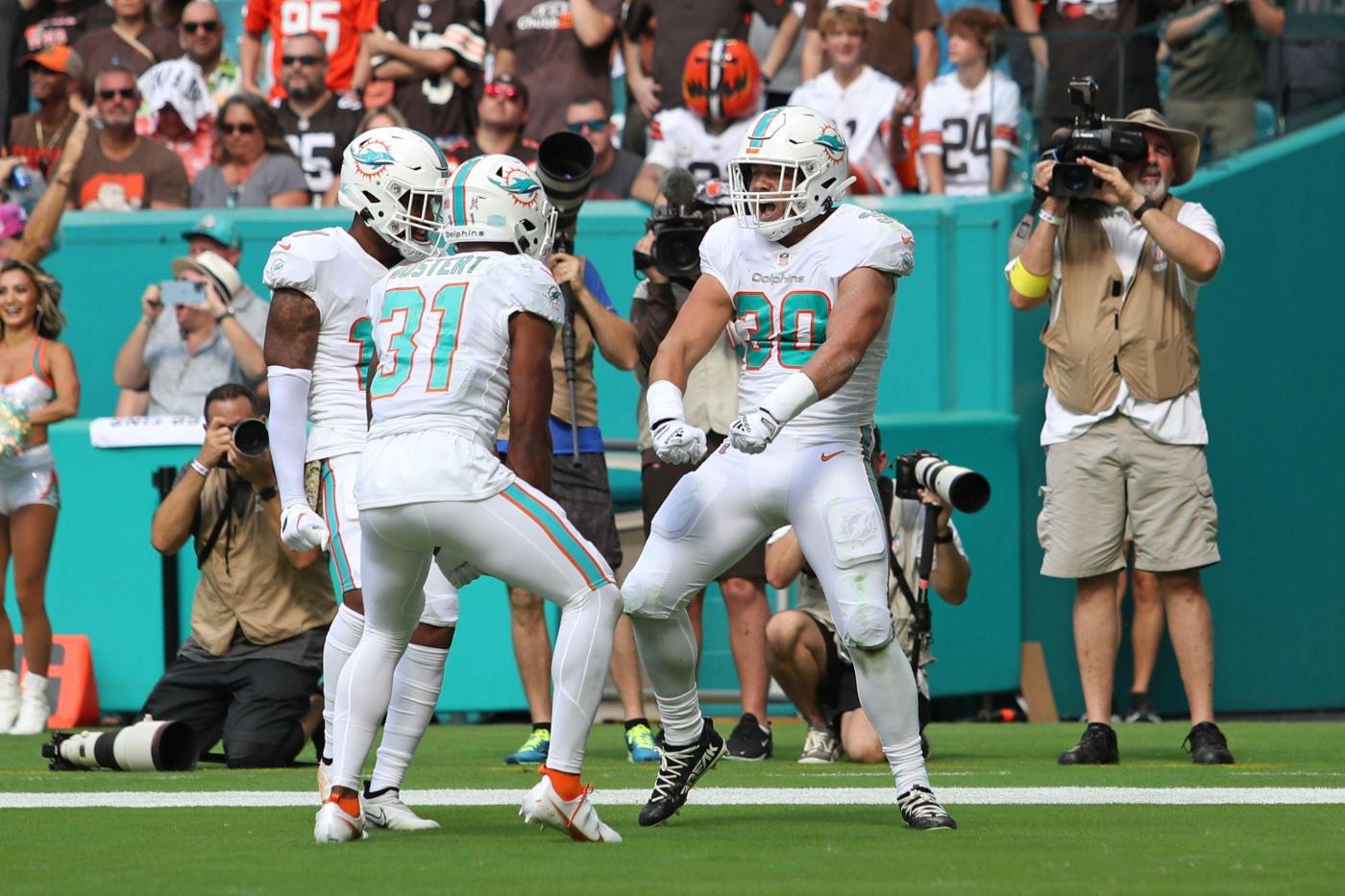 No, really, take a break with the Dolphins celebrating a 39-17 win against Cleveland by having a bye week.

This was as complementary a game as they’ve had in a while with the defense shutting down Cleveland’s strong running game and the offense continuing to point up big points.

Here are 10 thoughts on the game:

1. Stat of the game: Nick Chubb 11 carries, 63 yards. At half, he had 16 yards on six carries. Cleveland’s big chance Sunday was for Chubb to hit his 105.1-yard average in games. Until he ran for a 33-yard touchdown in a 30-10 game, his noteworthy play was a fumble caused by defensive tackle Zach Sieler. The Dolphins have given up big yards to speedy quarterbacks like Lamar Jackson and Justin Fields but haven’t given up a 100-yard game to a running back this year.

2. Player of the Game: Tua Tagovailoa. The first “M-V-P” chant began at Hard Rock Stadium in the second half. He completed 25 of 32 for 285 yards and three touchdowns. He hasn’t thrown an interception since he returned from his concussion four games ago. And this offense? It’s the first time since 2009 that the Dolphins scored 30 points in three straight games.

3. The 17 points the Dolphins defense gave up? It says why the fight for a home playoff game matters. The Dolphins defense has given up an average 32.8 points on the road through five games. They haven’t given up more than the 24 points to Minnesota at home. Cleveland’s offense entered Sunday averaging 24.9 points a game (same as the Dolphins). After an opening drive for a touchdown, the Dolphins defense took over. It wasn’t easy, as added injuries to their secondary meant they ended the game with reserves like Elijah Campbell, Justin Bethel and Eric Rowe in the secondary with former practice-squader Verone McKinley. Sure, it helped playing a career backup in Jacoby Brissett (22-35, 212 yards, sacked three times). But here were Cleveland’s possessions after the first drive: Fumble, turnover on downs, punt, end of half, field goal, touchdown, turnover on downs.

4. If you wonder why the Dolphins, like most teams, win the coin toss and defer the decision, Sunday showed why. The Dolphins blew open the game in the in the middle four minutes of the game. First, the defense held Cleveland to a …read more

‘Dancing With the Stars’ Pro Talks Getting ‘Old’: ‘Do I Need to Retire?’