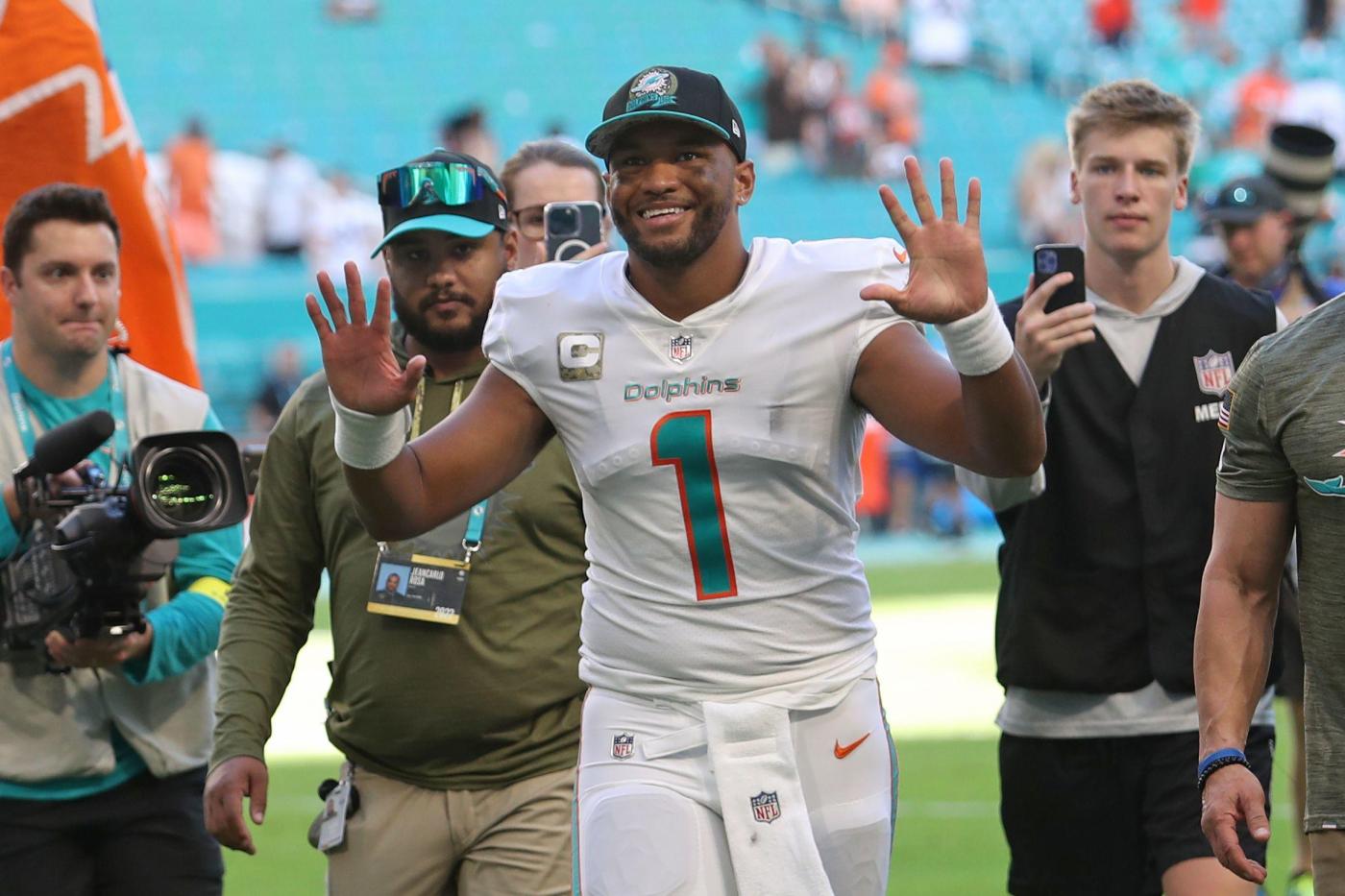 The Miami Dolphins released 10 minutes of Tua Tagovailoa “mic’d up” from the team’s Sunday victory over the Cleveland Browns, and what can be seen is pure joy from the third-year quarterback playing his best stretch of professional football.

As Tagovailoa made some of his best throws from his 25-of-32 performance for 285 yards and a third consecutive 3-to-0 touchdown-to-interception ratio, he’s shown bouncing around doing his go-to Smeeze dance.

“You look like a young me,” backup quarterback Teddy Bridgewater tells him of the way he’s having fun on the football field.

“You in Miami, boy,” Bridgewater, the Miami native, adds. “You make a play, you got to have swag.”

Tagovailoa’s heightened level of quarterback play in the last three games — nine touchdowns to zero interceptions and the three highest-rated games of his career, all with a passer rating of 135 or better — is a byproduct of many things.

He himself is locked in. He finally has the tools necessary with the league’s top receiving tandem of Tyreek Hill and Jaylen Waddle, an offensive line that is finally offering consistent protection and a burgeoning run game since the Dolphins traded with the San Francisco 49ers for running back Jeff Wilson Jr.

But Tagovailoa is also playing as free and as comfortable as he appears because of the confidence instilled in him through coach Mike McDaniel’s approach of empowering him from the moment he arrived in Miami to begin working with the left-handed passer the franchise selected with the No. 5 pick in the 2020 draft. It was another moment captured through their sideline interaction once Tagovailoa’s day was complete.

“You’re playing at a very, very high level,” McDaniel told his quarterback. “Facts are facts. … Not turning the ball over, getting the ball out, making smart decisions.”

But McDaniel doesn’t allow Tagovailoa to venture into the realm of overconfidence because of it. Not when, after the bye week and a home game against the Houston Texans, comes the gauntlet of a final regular-season stretch that hits the road to San Francisco, Los Angeles to face the Chargers, Buffalo and New England — the latter two in potentially frigid environments — and involves home games against the Green Bay Packers and New York Jets.

“That doesn’t mean anything for the next time we’re on the field,” McDaniel interjects amid the deserved praise.

A notion which Tagovailoa is on board with: “Just got to keep chopping the …read more

TikTok CEO says the company is set up to avoid the kind of job cuts Elon Musk made at Twitter: ‘We don’t need to lay off half the workforce to achieve the efficiency levels that we want’