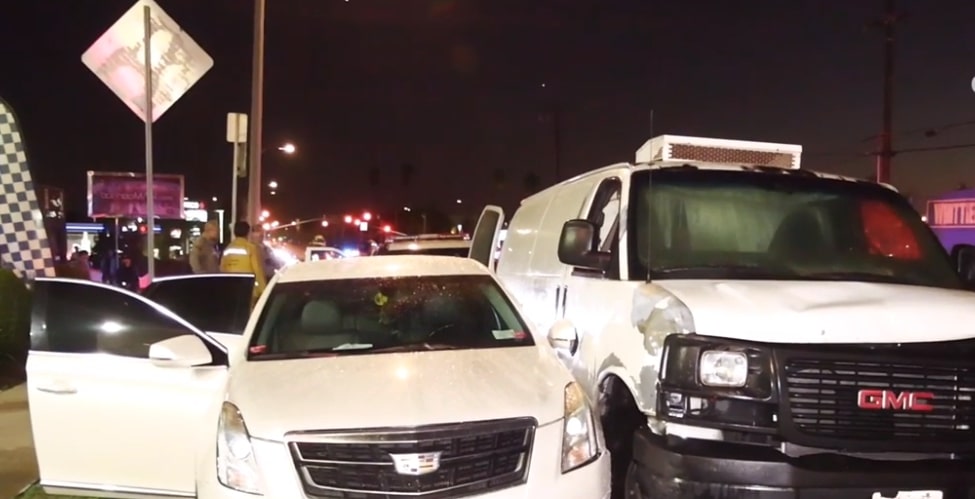 Orange County prosecutors have filed criminal charges against a parolee accused of leading law enforcement on a wild chase last week across Southern California that allegedly included the driver ramming into police cruisers and other vehicles before the hour-long pursuit ended in flames and gunshots.

Anchondo already was on parole for attempted carjacking and evading police, prosecutors said; if convicted of the new charges, he faces up to 54 years in prison. He is currently being held in Los Angeles County, but Orange County prosecutors say they can file charges for alleged crimes that span both counties since it was part of a spree that began in Orange County.

According to the Orange County District Attorney’s Office, Fullerton officers attempted to pull Anchondo over around 6:45 p.m. on Nov. 9 for unspecified vehicle violations. Anchondo allegedly responded by pulling into a condo complex, ditching his vehicle and running away on foot.

Prosecutors allege Anchondo then stole a van and repeatedly reversed it into a Fullerton police vehicle when officers attempted to block him in. A high-speed chase ensued, and prosecutors allege that Anchondo drove at nearly 100 miles per hour over the county line before ditching the van in Whittier.

Anchondo ran into a Whittier residence, prosecutors allege, and used a pair of scissors to threaten a homeowner while stealing a set of truck keys. Prosecutors say the truck owner tried to close a metal gate to stop Anchondo from leaving, but Anchondo drove the truck through the gate and escaped.

Some Twitter staff on H-1B visas and parental leave were fired in Elon Musk’s pre-Thanksgiving purge, a former engineer says

Lake refuses to concede in Arizona governor’s race she lost