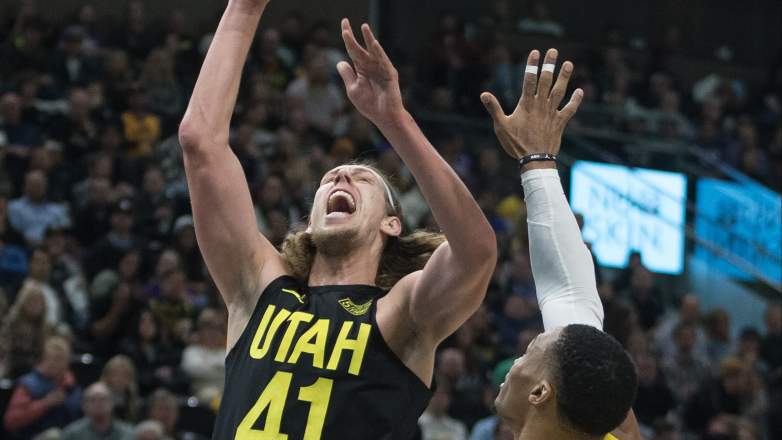 The saga of James Wiseman continues and could end with the former No. 2 pick parting ways with the Golden State Warriors this season.

Wiseman’s value has plummeted from two years ago, after recurring knee issues cut his rookie campaign short and sidelined him for the entirety of last season. Dubs head coach Steve Kerr recently admitted that Golden State is nearing the end of its dynasty. If that feeling is pervasive throughout the organization, it could lead to a decision to move on from Wiseman, despite general manager Bob Myers saying earlier this month that the front office isn’t looking to make roster changes too quickly in reaction to the team’s slow start.

Sam Esfandiari of Bleacher Report on Friday, November 18, authored a list of five plausible trade packages the Warriors could pursue in return for Wiseman considering his projected value at this point in time. While less sexy than some other names floated in the past, one of the most logical options is Kelly Olynyk of the Utah Jazz.

GettyCenter Kelly Olynyk of the Utah Jazz drives to the basket over Russell Westbrook of the Los Angeles Lakers during a game at the Vivint Arena on November 7, 2022 in Salt Lake City Utah. (Photo by Chris Gardner/ Getty Images)

Olynyk has been a solid contributor to Utah’s 10-6 start, which is strangely a problem since the Jazz made multiple moves over the offseason to reset and rebuild for the future.

That strategy, and how it has backfired in the form of winning, make the team’s starting center a prime candidate to be moved to a franchise he could help this year. Olynyk is averaging 13.2 points, 4.8 rebounds, 3.1 assists and 1.3 steals for the Jazz through 16 games, per Basketball Reference.

Esfandiari laid out an argument for the Warriors pursuing Olynyk in exchange for Wiseman and rookie small forward Patrick Baldwin Jr. as follows:

The Jazz’s surprising start caught the league by storm. But moves to deal Donovan Mitchell and Rudy Gobert for draft picks signal a long-term rebuild. However fun this story has been, do not be surprised if Utah sells off vets for …read more

CHART: All the ways Instagram influencers can make money from the platform and how it’s changed in the last year