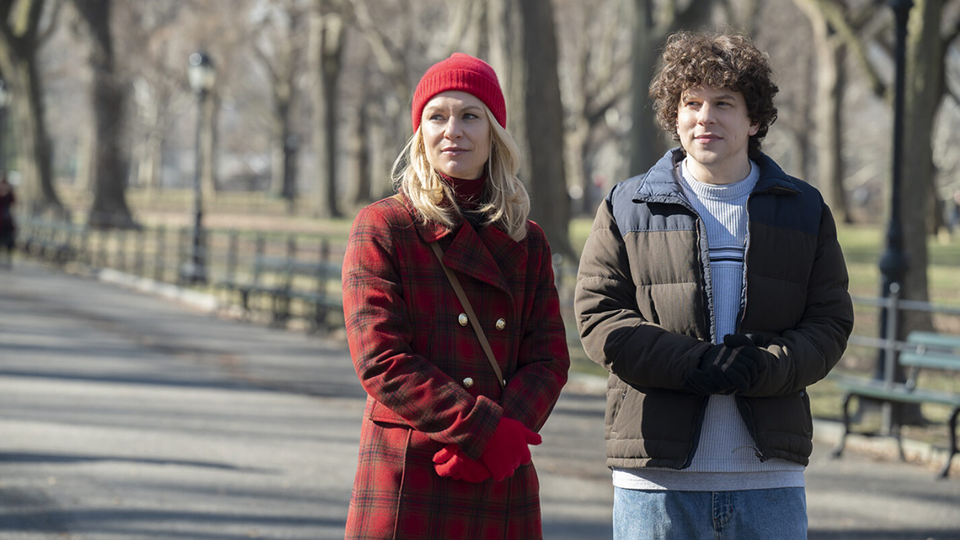 The television series Fleishman Is in Trouble begins upside down, with the camera soaring over an inverted Manhattan skyline—squat brick buildings in the top half of the frame, hazy blue sky below. It’s an appropriately destabilizing introduction for a show that’s constantly pulling the rug out from underneath us. The series is untrustworthy, in the best kind of way: It withholds and obscures and implies until it doesn’t. The initial focus is Toby Fleishman (played by Jesse Eisenberg), a newly divorced hepatologist on the Upper East Side whose recently downloaded dating app churns out more lifeless nudes per hour than Bernini in Rome. Toby’s ex-wife, Rachel (Claire Danes), has sequestered his kids in his apartment and fled to a yoga retreat upstate. Toby is angry; he has a job, too, Rachel, even if it’s her much more lucrative career as a talent agent that’s shaped the family until now.

If you’ve read the novel it’s based on, by the New York Times Magazine staff writer Taffy Brodesser-Akner, you surely know that things are more complicated than they seem. The tone can be pleasantly jaunty, the jokes sharp as daggers—one woman’s husband, we are told, “didn’t not have a photo of himself next to a dead giraffe and a live Trump son.” But as the story unfurls, it reveals its construction, layer by layer. Whose stories, the show wonders, are people more inclined to listen to? Whose version of the truth do we inherently favor without realizing that we’re doing so?

Fleishman explores these queries primarily through the narration of Libby (Lizzy Caplan), a college friend of Toby’s whose presence gradually gains more heft. It’s Libby’s diegetic voice that maps out Toby’s confusion at finding himself—after 15 years of marriage—more desirable than he had ever been as a bachelor. Slyly, the show suggests how efficiently sex has been defined in male terms, to the point where short, nebbishy Toby—Eisenberg plays him as intermittently flat and bilious—is overwhelmed by explicit overtures, as though he were the midlife Manhattanite woman’s Harry Styles. (The dynamics of dating apps do suddenly seem less benign when Brodesser-Akner, who also wrote the TV adaptation, applies them to a younger generation.)

Libby, a disaffected journalist also in her early 40s who quit her chronically frustrating job as a writer at a men’s magazine, has existential malaise of her own, although Toby never …read more

Whose Midlife Crisis Is It, Anyway?

Payton Pritchard Sounds Off on Role With Celtics This Season