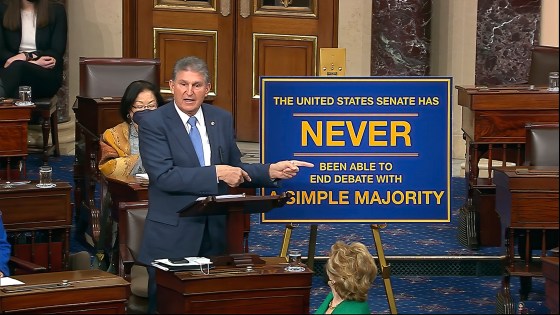 Senate Television via AP In this image from Senate Television, Sen. Joe Manchin, D-W.Va., speaks on the floor of the U.S. Senate Wednesday, Jan. 19, 2022, at the U.S. Capitol in Washington.

WASHINGTON — Voting legislation that Democrats and civil rights groups argued is vital for protecting democracy was blocked Wednesday by a Republican filibuster, a setback for President Joe Biden and his party after a raw, emotional debate.

Democrats were poised to immediately pivot to voting on a Senate rules change as a way to overcome the filibuster and approve the bill with a simple majority. But the rules change was also headed toward defeat, as Biden has been unable to persuade two holdout senators in his own party, Kyrsten Sinema of Arizona and Joe Manchin of West Virginia, to change the Senate procedures for this one bill.
[time-brightcove not-tgx=”true”]

“This is not just another routine day in the Senate, this is a moral moment,” said Sen. Raphael Warnock, D-Ga.

The initial vote was 49-51, short of the 60 votes needed to advance over the filibuster. Senate Majority Leader Chuck Schumer, D-N.Y., voted no for procedural reasons so Democrats can revisit the legislation.

The nighttime voting capped a day of piercing debate that carried echoes of an earlier era when the Senate filibuster was deployed in lengthy speeches by opponents of civil rights legislation.

Voting rights advocates are warning that Republican-led states nationwide are passing laws making it more difficult for Black Americans and others to vote by consolidating polling locations, requiring certain types of identification and ordering other changes.

Senate Television via AP In this image from Senate Television, Sen. Joe Manchin, D-W.Va., speaks on the floor of the U.S. Senate Wednesday, Jan. 19, 2022, at the U.S. Capitol in Washington.

Democrats decided to press ahead despite the potential for high-stakes defeat at a tumultuous time for Biden and his party. Biden is marking his first year in office with his priorities stalling out in the face of solid Republican opposition and the Democrats’ inability to unite around their own goals. But the Democrats wanted to force senators on the record — even their own party’s holdouts — to show voters where they stand.

“I haven’t given up,” Biden said earlier at a White House news conference.

Sinema and Manchin have withstood an onslaught of criticism from Black leaders and civil rights organizations, and they risk further political fallout as other groups and even their own colleagues threaten to yank campaign support.

Read More: Why Biden Wants to End the …read more

Joe Biden seemed to have a lot he wanted to get off his chest. Just over an hour into the second press conference of his presidency and the first since his approval ratings plummeted this fall, Biden stopped referring to his seating chart printed with reporters’ faces and names and started calling on anyone shouting questions. “How long are you guys ready to go?” Biden asked. “You want to go for another hour?”

For 111 minutes, Biden stood at the lectern under the crystal chandeliers of the White House East Room and defiantly touted his Administration’s accomplishments during a low moment in his presidency. Biden could have reset the tone and charted a new course for his second year, following months of bad news about another spike in COVID-19 infections, skyrocketing prices, the fallout from a chaotic withdrawal from Afghanistan and Democratic party infighting that has stalled major pieces legislation.
[time-brightcove not-tgx=”true”]

Instead, Biden doubled down. One day before the anniversary of his inauguration, Biden defended the record of his first year in office, pointing out that he pushed COVID-19 relief funding into American bank accounts, rolled out vaccines to 200 million Americans, saw record employment gains and passed a bipartisan, trillion-dollar investment in America’s infrastructure. On Afghanistan, Biden said he makes “no apologies” for his decision to withdraw, despite the country falling into the hands of the Taliban and the humanitarian disaster unfolding now.

“I didn’t over promise,” Biden declared about his first year in office. “And I have probably outperformed what anybody thought would happen.”

At the day of the press conference, Biden’s approval rating was just 41.9%, according to a polling average tracked by FiveThirtyEight. But the President deflected his low poll ratings and other challenges like the supply chain issues as the results of the lingering pandemic. “I know there’s a lot of frustration and fatigue in this country,” he said. “And we know why: COVID-19.”

Biden acknowledged a few missteps on taming the virus. He said he could have ramped up COVID-19 testing months before his Administration announced in January it would order a billion tests to be made available to the public. “Should we have done more testing earlier? Yes. But we’re doing more now,” Biden said. He has been criticized for focusing his COVID-19 strategy too much on vaccinations and not enough on bringing sufficient resources to making at-home test kits and …read more