OAKLAND — The election of an Oakland school board candidate who officials say was incorrectly certified the winner could be overturned after an Alameda County judge ordered a partial re-examination of the results.

Judge Brad Seligman has the sole power to rescind the results of the Oakland Unified District 4 school board election in November that was called for winning candidate Nick Resnick, but which county officials later determined should have been won by third-place finisher Mike Hutchinson.

Resnick was certified as the winner of the three-candidate race in December after county officials mistakenly suspended 235 ballots where voters left the first column blank, leading to a messy and drawn-out fight over the results. Had the county followed the Oakland city charter, the majority of those ballots would immediately have been transferred to Hutchinson through the city’s ranked choice format, which allows voters to rank preferences.

Seligman has ordered the county registrar’s office, led by Tim Dupuis, to pull the already-counted ballots and allow both candidates’ attorneys to look them over and verify that Dupuis’ latest tabulation of the votes was accurate.

But the parties involved are resisting calling the process a “recount,” given that the ballots are not being tabulated again but merely checked to ensure that columns weren’t incorrectly determined to have been left blank.

“It’s a very loose process,” Hutchinson said of the limited review. “It’s just all the parties involved coming together.”

Nick Resnick, right, delivers his speech after taking the Oath of Office as Oakland Boardmember of Education for District 4 during the inauguration ceremony at the Paramount Theater in Oakland, Calif., on Monday, Jan. 9, 2023. (Ray Chavez/Bay Area News Group)

Dupuis’ office has taken public heat for the election snafu. Earlier this month, the county Board of Supervisors requested that an outside registrar be brought in for a hand recount of not just the botched school board race, but also the closely contested Oakland mayoral election and a pair of close races in San Leandro.

None of what the supervisors requested is likely to happen, given that their only apparent legal recourse was Hutchinson and Resnick’s very specific efforts in court to contest the outcome of their school board race. The deadline for any recount not ordered by a judge has long since passed.

“The judge was not prepared to open that vague a can of worms,” Hutchinson’s attorney, Beverly Palmer, said in an interview. “He just wants to see, for now, …read more 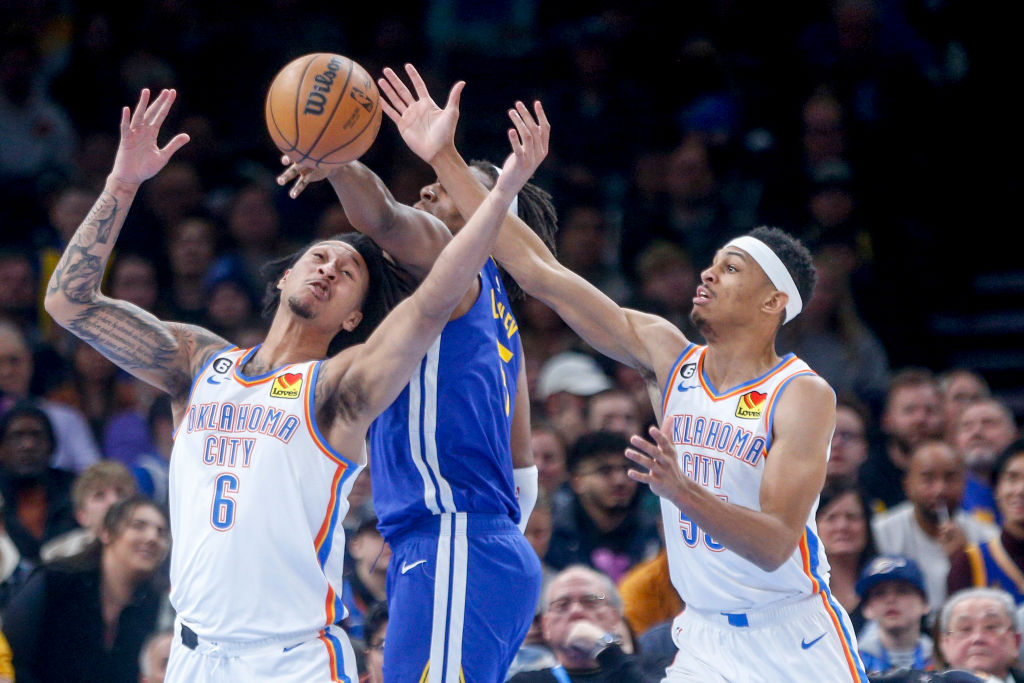 OKLAHOMA CITY — The Warriors avoided near disaster Monday night when the Thunder roared back in the second half.

Oklahoma cut the Warriors’ 21-point lead down to two twice in the fourth quarter, but Golden State held on 128-120 to win its third consecutive game.

Monday was a vintage Splash Bros showing, and the Warriors needed every contribution from Stephen Curry and Klay Thompson. Curry recorded a double-double with 38 points and 12 assists and Thompson added 28 points.

The Warriors got off to a hot start. They moved the ball well, recording a season-high 15 assists in the opening quarter to take a 38-20 lead at the end of the first. They maintained their edge for the remainder of the first half and looked to be running away with it in the third, pulling ahead by as many as 21. But that’s when Shai Gilgeous-Alexander and the Thunder got rolling.

Oklahoma opened the fourth with a 13-6 run. Jalen Williams hit a step-back 3 to cut Golden State’s lead to two. The Thunder would trim the visitor’s lead to two once more but could not top the reigning champs.

Thunder fans started to head to the exits with the Warriors up seven with 41 seconds left.

Gilgeous-Alexander scored 21 of his 31 points in the second half.

Golden State, who is eight games back from the first-place Nuggets, will make their second and final regular-season trip to the Twin Cities when they play the Minnesota Timberwolves on Wednesday.

The Dallas Cowboys could consider moving on from one of their key pieces.

As proposed by Bleacher Report’s Kristopher Knox, the Cowboys “must consider” cutting three current players on their roster. Dallas isn’t exactly in an extremely flexible salary cap situation as they’ll be $7.4 million over the salary cap entering the offseason. As Knox mentions, Dallas should consider cutting defensive tackle Neville Gallimore.

Knox argues that while Gallimore was a solid contributor during the 2022 season — he appeared in 37 percent of defensive snaps this season — he’s an expendable piece that could save the Cowboys $2.7 million in 2023.

“The 26-year-old was a solid contributor in 2022, making one start and finishing with 33 tackles and a sack,” says Knox. “However, Gallimore played just 37 percent of the defensive snaps and should not be considered a long-term priority. Furthermore, Gallimore is slated to carry a $3 million cap hit in 2023. Of that, only $240,991 is in dead money. This means that the Cowboys could cut Gallimore outright and save just over $2.7 million in cap space.”

Cutting Gallimore will only cost the Cowboys $240,991 in dead cap money.

The 26-year-old has been a key member of Dallas’ defensive line rotation since entering the league in 2020. He actually emerged as a starter during the 2020 season after injuries to Gerald McCoy and Trysten Hill, starting nine of his 14 appearances and playing in 44 percent of defensive snaps. He also appeared in 48 percent of the defensive snaps during the 2021 season.

With that being said, the Cowboys already have their starting defensive tackles in Johnathan Hankins and Osa Odighizuwa and they need money to re-sign key franchise players in Tony Pollard and Dalton Schultz. Dallas could simply use one of their draft picks to acquire Gallimore’s replacement at a cheaper cost.

As Knox stresses, Gallimore is simply not a “significant” piece of the Cowboys’ future.

“Again here, $2.7 million doesn’t represent an extreme saving,” says Knox. “However, that’s a sizeable chunk of cap space for a part-time player who has never played 50 percent of the snaps in a single season. Gallimore is on the younger side, but he’s entering the final year of his current deal and does not figure to be a significant piece of Dallas’ defensive future.”