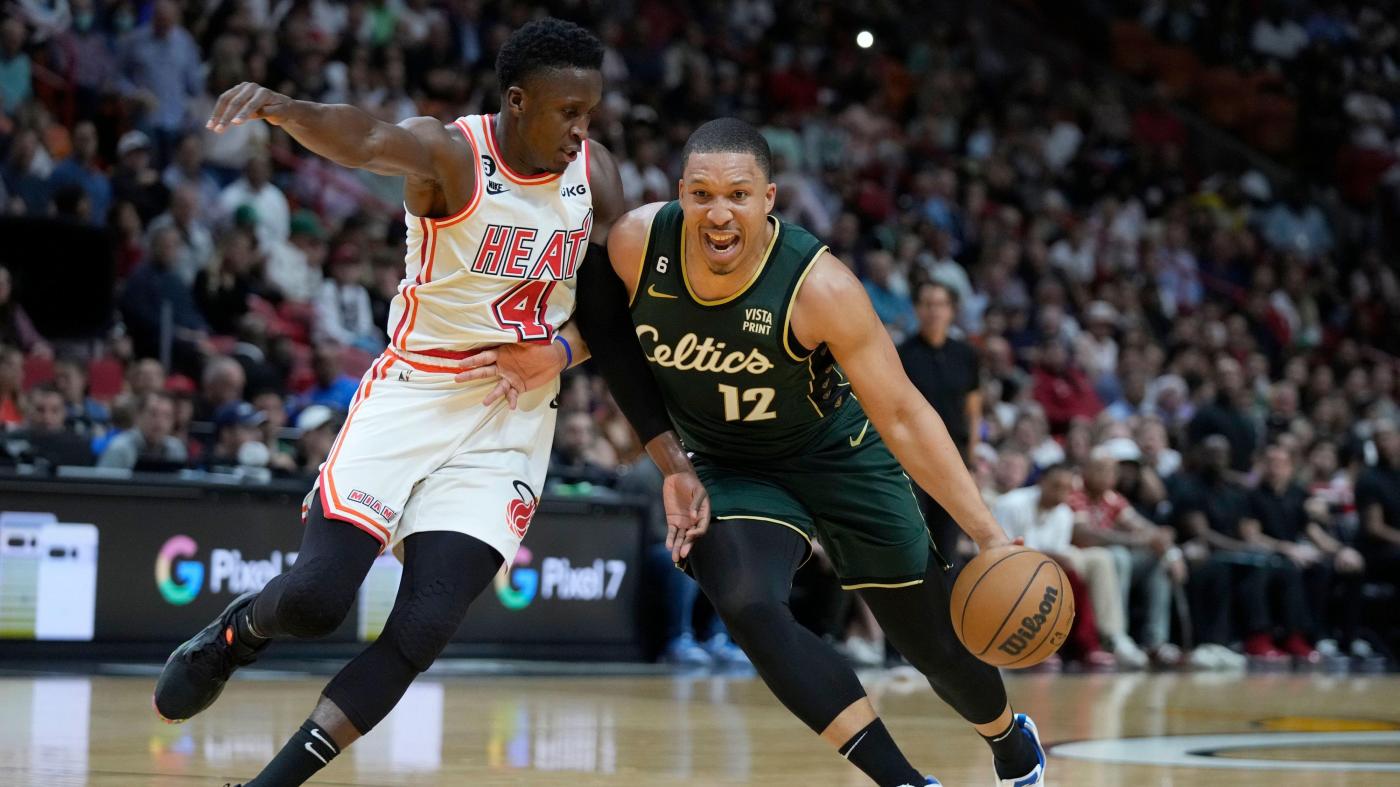 Observations and other notes of interest from Tuesday night’s 98-95 victory over the Boston Celtics:

– A week from now, Eastern Conference coaches will have to submit ballots for reserves selections for the All-Star Game.

– On Tuesday night, with the Heat playing in the injury absence of Jimmy Butler, Bam Adebayo showed he can stand as a singular star.

– With every ounce of his effort needed.

– In the scoring column.

– On the defensive end.

– As complete an effort as the Heat have seen this season.

– Including a feathery late jumper.

– The continuity with the Heat’s starting lineup lasted three games.

– With Butler out due to lower-back tightness that the team said was sustained pregame, it put on hold the preferred starting group of Butler, Adebayo, Caleb Martin, Tyler Herro and Kyle Lowry.

– That had Max Strus making yet another emergency start.

– Butler had trouble loosening up before the game.

– For his part Martin continues to work back from the quadriceps strain that had him out until the Jan. 16 game in Atlanta.

– “There’s still some leftover stuff I’m dealing with,” he said. “But overall I feel good enough to go do what I need to do.”

– He still doesn’t look all the way back.

– With the start, Lowry tied Chris Webber for 94th on the NBA all-time list.

– With the appearance Adebayo tied Eddie Jones for 11th on the Heat all-time regular-season games list.

– Perhaps coincidence, but the news of the Butler absence came after the Celtics confirmed that they would be without Jaylen Brown, Marcus Smart and Al Horford.

– Smart is still a week or two from returning from his ankle sprain.

– With Brown and Horford, it was more a case of rest than injury.

– With the NBA scheduling the Celtics for a Monday night game in Orlando that they lost.

– Heat coach Erik Spoelstra found himself adjusting on the fly with Boston’s injury update, having prepared at the morning shootaround for something closer to the complete Celtics.

– “This morning we had to prepare for all the possibilities of the guys being available,” he said. “And then when you find out that some guys aren’t available, then you still have that pregame to make those adjustments.”

– Spoelstra said such accommodations have become par for the NBA course.

– “It depends on the game, it depends on who the team is,” he said of the level …read more

Winderman’s view: Bam Adebayo does it all when needed most as Heat subdue Celtics

A luxury cruise ship will allow its residents to permanently live at sea. See inside its 1,430-square-foot condos selling for $8 million.